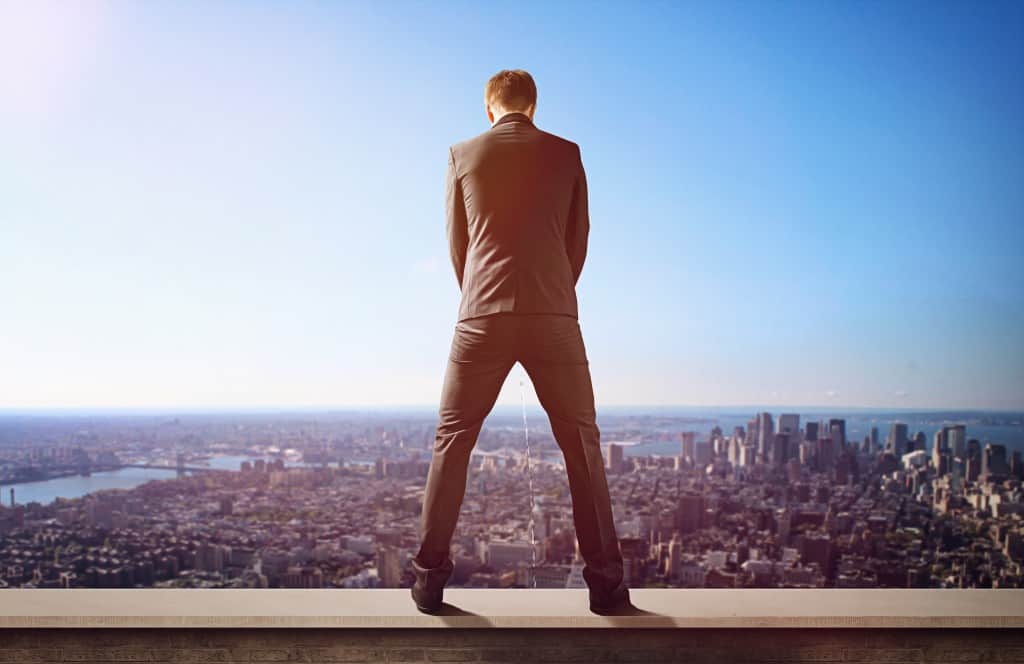 If you’re finding that peeing in a standard toilet is getting rather boring, maybe it’s time to use your pee for the good of mankind. Bodily perspiration has many valuable uses and best of all, you make it for absolutely no charge – down at the bottom of your garden or behind closed doors. The Ancient Romans didn’t put a tax on one’s own pee-wee for nothing, they knew the true value of it. Now, thanks to this list, you can too!

1. Pee in a pot and make invisible ink!

Ever wondered where the phrase “read between the lines” comes from? No, neither have I, but I’m going to tell you anyway. Ancient Roman spies used their own pee as invisible ink on the end of their feather writing quills to write secret messages between the lines of important official documents. This meant only the elite, who knew about this use of urine as ink could read them. Messages appeared once the paper was heated up.

2. Use it to clean your garden paving!

Do you spend a lot of money on expensive garden paving cleaners and patio decking cleaner? Bring a new lease of life to your garden paths with your own bodily waste. If you check most garden cleaners they all contain ammonia, which helps neutralise dirt and grease. Ammonia is formed in our own liquid gold once it is left for 24 hours. Mix it with one part pee and one part water and you have yourself a great cleaning fluid.

3. Make pee a superfood for your plants!

Studies have shown that “watering” your plants by peeing on the soil around them can make vegetables and flowers FOUR times larger. So if you want to grow super vegetables and the tallest plants possible, there’s no better way forward than by using your own pee. Human urine contains high levels of nitrogen, potassium and phosphate – all of which are vital nutrients for plants. However, because your bodily waste is so strong, you will need to heavily dilute your pee to one part urine, twenty parts water before you start.

4. Make your own garden electricity!

Last year a group of teenagers from Lagos, Nigeria, developed a urine powered generator that can produce six hours of power on just one litre of pee. The device works by separating out the hydrogen from urine using an electrolytic cell, the hydrogen is then purified and used to run a small generator. Scientists have also developed a mobile phone charger that is powered by pee!

There’s no need to water down your wee-wee when you need to kill off some garden weeds. Just collect some morning pee regularly for a week and then apply it, fully concentrated directly to problem weeds for a cheap alternative to pricey garden centre products. As with most chemicals, the toxicity is related to the concentration, so a higher strength urine (such as that let out first thing in the morning) will yield the best results.

Fed up of animals getting in your garden and ruining your prized fruit and vegetables or digging up your garden? Keep them away by peeing around the perimeter of your garden once or twice a week. Animals will generally avoid human scents as they are unable to identify that the smell has been left hours ago and instead take it as a signal that you’re close by. However, keep in mind that some animals are more intelligent than others, squirrels for instance will ignore the scent and only react to physical presence.

7. Turn your pee into clean drinking water or fuel!

Astronauts have been drinking their own pee for years, but now thanks to a new invention, they can turn it into clean drinking water! Scientists have developed the Forward Osmosis Bag that turns urine into clean water through a process of diffusion. The bag allows water droplets to pass through while blocking larger molecules like salts, sugars, starches, proteins, viruses, bacteria and parasites. Scientists are also working on devices that turn human urine into fuel, meaning your car may soon be running on your need to go!

Buying luxury compost can be very expensive, and making your own out of various household waste and lawn clippings isn’t always easy either. Yet, with one simple ingredient added your compost can become a marvel to green-fingered gods everywhere. What is that ingredient? Yep, you guessed it. Pee. Farmers in Nepal have been peeing on their compost piles for centuries and in a recent study of sweet pepper growers, plants grown in soil that had a combination of human urine and compost grew the tallest.

9. Mix yourself up some homemade glue for broken metal!

In Ancient Greece urine was of particular value, especially the pee of infants, which was considered the purest. It has been mentioned numerous times in famous ancient writings that this was often mixed in a copper pestle and mortar with verdigris and nitrum to create a gold glue that was used for jewellery and to fix early metal pots and sculptures. So the rich of Ancient Greece and later Ancient Rome wore expensive jewels around their necks fused with none other than human pee!

10. Revive some colour to your garden furniture!

Does your garden sun lounger need brightening up? Have your outdoor sofa cushions turned a tasteless off white or lost their brightness? UV rays and bad weather can damage the colour of outdoor furniture to states that are seemingly unrecoverable. However, don’t fret, because a little diluted pee can help restore those colours in no time. Just mix one part urine with ten parts water, apply and scrub. In England during the 16th century, the rich even used pee collected from pots in the streets to bleach fabrics and remove stains.

So off you go, pee freely and most importantly, enjoy it!