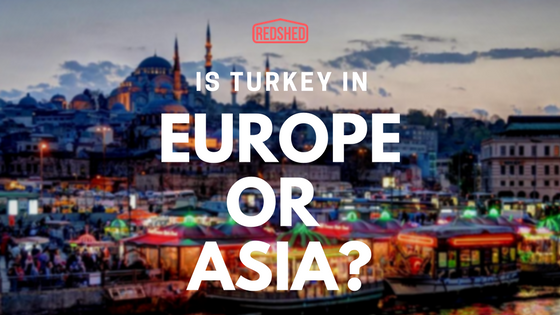 Geographically, the Republic of Turkey is one of the few countries that occupies two continents. It lies partly in Southeastern Europe and partly in Western Asia. Thus it’s called a transcontinental Eurasian nation. Because of this, the culture in this country is diverse which makes it very interesting. Turkey’s highest peak, Mount Ararat, is also believed to be the final resting place of the Biblical Noah’s ark.

The Republic of Turkey is among the world’s developed countries, and their economy mostly depends on their rich textile, petroleum industries, mining, agricultural, steel, and food processing. Turkey is surrounded by the Mediterranean Sea, Black Sea and the Aegean Sea. With all those facts in mind, we just have to clear out one thing: Is Turkey in Europe or Asia?

Where in the World is Turkey?

If you look at the world map, it’s pretty obvious that nearly all (97%) of Turkey land mass is positioned on Asia. This comprises the oblong peninsula of Asia Minor, which is also known as the Anatolia where there’s a mixed climate of fertile and semi-dry. This region of the country is also full of hills and mountains while the remaining part is called the Thrace which is positioned in the extreme part of Europe. More than 10% of Turkish are residing in Thrace as it is where the largest city in Turkey, Istanbul is located. While the capital of the country, Ankara, is located in Asia. The Turkish Straits, which is comprised of the Straits of Bosphorus, and the Dardanalles, along with the Sea of Marmara, are responsible for separating Thrace in Europe and Anatolia in Asia.

Political decisions in Turkey are also greatly influenced by their geographical location. Europe is pro-democratic and capitalist while Asian countries are already into communism and socialism. Because of this, the Republic of Turkey faced some challenges regarding on political aspects. However, the state has mostly aligned their political identity with the West (Europe). In fact, the Republic of Turkey is a member of the North Atlantic Treaty Organization (NATO), and they have even aided the West by taking down Syrian rebels. The country also possesses the second largest standing military force in NATO, and they share a nuclear policy with Western countries such as Germany, Belgium, Netherlands, and Italy.

Turkey, being a republic, is ruled by a president, which is a democratic ideology. However, they have strict laws implemented against speaking against their current leader, which is similar to a socialist mentality. In fact, more journalists are imprisoned in this country than any other nation.

The Influence of Turkey’s Culture With Its Location

Turkey has inevitably become a multi-ethnic and cultural nation because of its location. It has been both a bridge and a barrier for Europe and Asia, as well as Islam and Christianity. Nevertheless, despite the mix of cultures and ethnic groups in the country, Turkey has managed to boost its economy. Their development is closely reflected on Western ideologies, even though 95% of its land mass lies in Asia.

Today, the Republic of Turkey is among the world’s famous destinations because of its archaeological sites, exciting culture and natural beauty. If you want to go hiking or swim on the beach, this country can offer the best of both worlds (or continents). To add some information, Turkey is home to various plant and animal species. In fact, a new plant is discovered in the country every 10 days!